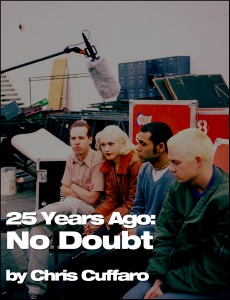 This was a good day!  I basically got to hang out with No Doubt all day.  This shoot was for Spin Magazine and it was the first time I saw them since 1991.  They were doing a show at the Palladium in Hollywood that night.  I was there to document the soundcheck, press conference and what every happened that day.

I met the band at the Hilton Hotel on Highland Blvd in Hollywood.  I reconnected with the Gwen Stefani and the boys.  We had fun catching up on life and work.  By this time they were blowing up and a BIG deal.  It was fun to see the changes in them and the band.  We had lots of laughs and just had the best day.  This reconnect helped set up a shoot months later for Interscope Records.