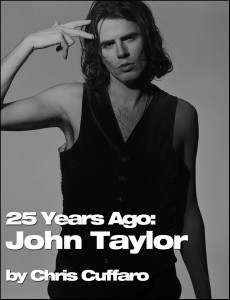 This was a fucking blast!  I met John Taylor when I shot the Neurotic Outsiders for Maverick Records.  We got along great and he was super cool.  Months later I got asked to shoot his solo album cover for his label B5 Records.  We did the shoot at Smash Box Studios in Santa Monica.

It was fun shooting John for his first solo cover and shooting him at Smash Box made it super special.  We did a few looks through out the day.  I did my best to capture the best John and make him look good.  For fuck sake he’s in Duran Duran!!!  When the finished product came out I was so proud.  It’s one of my favorite album covers!