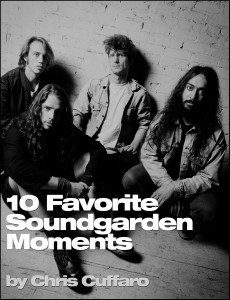 SO many moments in my life that I will always be grateful for.  So many crazy moments that I did not have a camera to record.  My moments with Soundgarden are truly special.  I loved the band and every moment I got to hang or shoot.  Chris, Matt, Ben and Kim always treated me with respect and yes, we did laugh a lot.  Here’s 10 big ones…